Welcome to Britlinblue Reg'd . I am a member of the CKC( Can Kennel club)  in good standing. Specializing in blues along with black and fawn occasionally., with substance and style.Also of sound mind and body!! I am  located in Debert (near Truro). Nova  Scotia,Canada. Please click on the buttons to bring up each page.Enjoy your stay,and please come back again!!

HISTORY OF THE GREAT DANE
Often called the Apollo of dogs, the Great Dane can trace its paw prints as far bacof Tibet. There is great similarity between the Tibetan Mastiffs that lived at the base of the Himalayas and the Dane like dogs of the Assyrians. The zoologists' belief gains credibility in that the earliest written report of dogs strongly similar in type to the Great Dane appeared in Chinese literature in 1121 B.C.

The highly cultured Assyrians traded their dogs to the Greeks and Romans along with other goods they manufactured. The Romans in turn bred the Assyrian dogs to British dogs they also acquired. Thus it appears both the Tibetan and English Mastiffs are forbears of the Great Dane.

There was some debate as to whether the Irish Wolfhound or Irish Greyhound played a secondary role in the Dane's development. The French naturalist Comte de Buffon, who lived during the 1700s, thought the Irish Wolfhound was the primary ancestor of the Dane because the Celts had taken some of the huge dogs from the Romans and English to Ireland where they were bred to the native Irish Wolfhounds. But Baron Georges Cuview, an anatomist who lived from the late 1700s thought it was the early result of an English Mastiff and Irish Wolfhound cross.

The earliest Danelike dogs were called Boar Hounds, for the prey that hunted, but by the 16th century they were known as English Dogges.
Around 1680, when German noblemen were breeding great numbers of the dogs. Drawings of dogs resembling Great Danes were found on Egyptian monuments dating from 3,000 B.C., and artifacts found in Babylonian temples built about 2,000 B.C. include a relief-plate showing Assyrian men walking huge, Dane like dogs on stout leashes. The dogs depicted have the same massive body and long, powerful legs as today's Great Dane.

Some zoologists believe that all Dane-type dogs originated in the highlands handsome dogs were kept inside their homes. These dogs were called Kammerhunde, meaning Chamber Dogs. These pampered pets wore gilded collars trimmed with fringe and padded with velvet.

Buffon gave the breed the name it's known by today. While traveling in Denmark, he saw the slimmer variety of the Boar Hound, which shared more similarities with the Greyhound. Buffon remarked that the Danish climate had caused the Greyhound to become a Grand Danois. Thereafter, the dogs became known as the Great Danish Dog, with the heavier dogs sometimes called Danish Mastiffs.
The Danish name stuck-despite the fact that Denmark had nothing whatsoever to do with the development of the breed.

Most fanciers today credit Germany with the well-balanced, elegant Great Dane as we know it. It is known that German nobility imported these English Boar Hounds until the 17th and 18th centuries, by which time they had developed their own breeding stock and no longer needed the imports.
In 1880, a Dr. Bodinus held a meeting in Berlin where judges and breeders agreed that the breed as developed by the Germans was distinctly different from the stockier English Mastiffs and would henceforth be known solely as the Deutsche Dogge, or German Dog. The Deutsche Doggen Club of German was founded, and the name Deutsche Dogge took hold in parts of Europe.
The Germans had a hard time convincing other countries to accept the breed name, however. The Italians to this day call the breed Alano, which means mastiff. In England, the United States and other English-speaking countries, the dogs are called Great Danes.

"The reason a dog has so many friends is that he wags his tail instead of his tongue." -- Anonymous 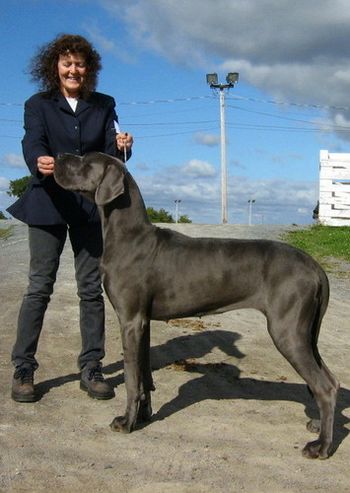 A  PEDIGREE  IS A GIFT CREATED BY MANY  BEFORE YOU, TREAT IT WITH RESPECT BY NOT GIVING IT

TO  EVERYONE AS NOT EVERYONE  RESPECTS OR DESERVES  SUCH A  WONDERFUL GIFT  !!